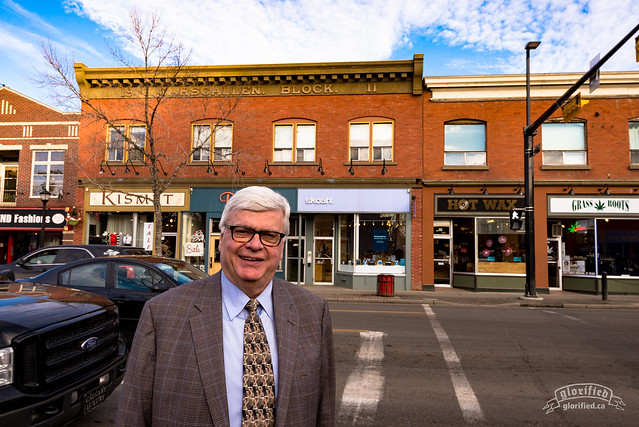 “You know, I can still see those stairs leading up from the street to the apartments in my mind. My mother always said, ‘Don’t go near those stairs!’ My father served in the army in the second World War and when he came back from Europe, he couldn’t find anywhere to live. There was nothing available for rent. She arrived from Holland in September of 1946, and I was born in the Calgary General Hospital in December in that same year. We lived in that apartment up those stairs there at the Carscallen Block until I was about three years old. Can you imagine coming from Holland to this place back in those days?

Our family moved to, I think it was 301 16th street in Hillhurst. I think that house is still there. From there we moved to Mount Pleasant when I was five years old.

You know the thing that kills me? Back when I was living in Hillhurst, the Grocer and the Milkman used to come around with a horse and wagon. Can you imagine? Think about that, it was in my lifetime.

My dad was a party animal. He was coming across the Tenth Street Bridge with a friend in the middle of winter and got his car stuck in a snowbank. There was nobody to clear the snow, so he and his friend just left it there and walked all the way home. They almost didn’t make it!

I think this neighbourhood is ‘Old Calgary’ really. Lots of little boutique-y stores. Mom and I used to walk to The Bay downtown. The streetcar used to come down Kensington Road and take you down to Bowness Park. Back then, as soon as you hit the city limits, you had to give them another nickel because Bowness was another town altogether.

I started with Atco and built high-rise buildings. I bought West Canadian Print on June 18, 1984 and this year it’ll be thirty-two years I’ve owned it. I’ve also served on the Calgary Stampede board for thirty-two years and was Chairman of the Board in 2007-2008.

I’ve hosted Breakfast on the Bridge twice, and I’m looking for a speaker this year. We’ve raised over $350000.00 for the Military Family Resource Centre. It’s for soldiers and their families to get reestablished when they get back from service.