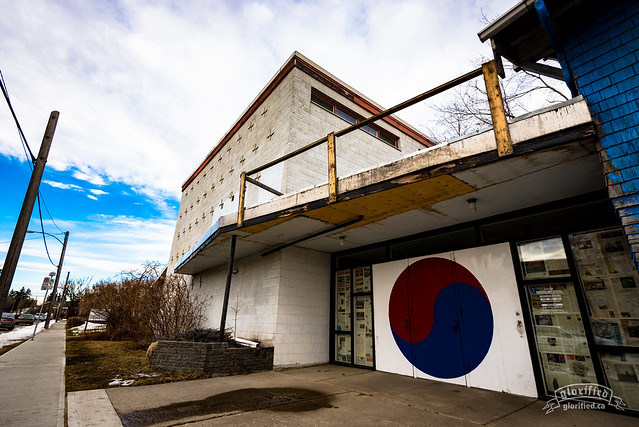 Well…
You win some and you lose some. In this case, it appears that the venerable JJ Lee Tae Kwon Do school has closed it’s doors. I’m not sure if they’ve moved to a different location or if they’ve shuttered down for good, but there’s a lesson to be learned here.

I personally took it for granted. I assumed that this business would somehow always be a mainstay of the community, with it’s yellow revolving sign, the Taeguk painted on their door, the droves of kids dressed in their dobok, the walls of trophies in their showcases. I wanted to feature this magical place in #Sunnyside365, but alas, I was too late.

The lesson is: don’t wait until it’s too late. The businesses in our neighbourhood are run by real people. Human beings who have lives and histories that are fascinating in their own telling. It’s no secret that operating a business in Kensington is challenging and I can attest to that because I hear the worried voices of business owners who are concerned about their lease sky rocketing every turn.

I hear about developers wanting to establish higher population density, while attracting more business and traffic to the neighbourhood, but what that cost is (literal or figurative) and who pays for it (the residents, the business owners) is anybody’s guess.

What I’m saying is, I truly believe that the future of Hillhurst-Sunnyside rests in the hands of a symbiotic relationship between local entrepreneurs and land owners, supported by customers and clientele of these businesses. Otherwise the we run the risk of this community being groomed into an unremarkable retail district with high rents. The ‘character’ and ‘charm’ will be lost.