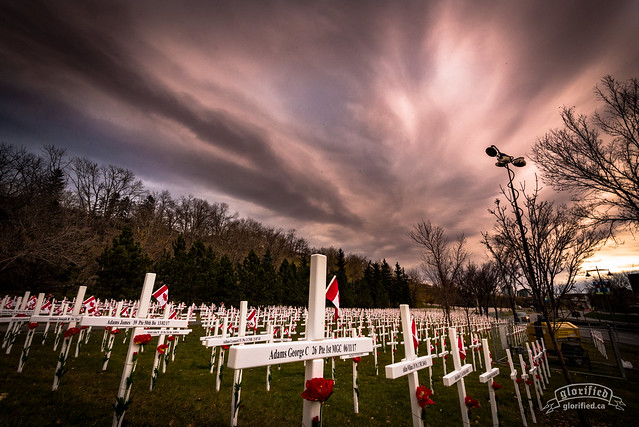 There’s something that keeps drawing me back to this memorial. Even though the crosses are symbolic–nobody is actually buried there–I find myself thinking about the far reaching effects of the World Wars. On April 24,1915 my ancestors were forcefully deported from their homes in what is now Eastern Turkey and became survivors of the Armenian Genocide. They fought for survival as they crossed the deserts into Iraq, Syria, Lebanon, and beyond–all casualties of a war that had spread all over Europe like an unstoppable brush fire.

Meanwhile, on the Western Front, the Battle of St. Julien (2nd Battle of Ypres) was underway, famous for being the first full-scale use of chemical weapons in the Great War. Countless Canadian troops gave up everything they had, ultimately to a loss of over 125’000 soldiers who ended up dead, wounded or missing in action from both sides of the conflict. It was at this place, during that month-long battle where Lieutenant-Colonel John McCrae had famously written his poem, “In Flanders Fields.”

When I was a child, we participated in Remembrance Day events. Being a first-generation Canadian, I never really understood the magnitude or impact that these wars had on my family. When people talk about how the soldiers at the time gave up their lives for our freedom, I never truly understood until I put in context of the Armenians massacred.

Now I know that if it weren’t for those Allied forces fighting so bravely, Armenians would have just been a memory in a history book.