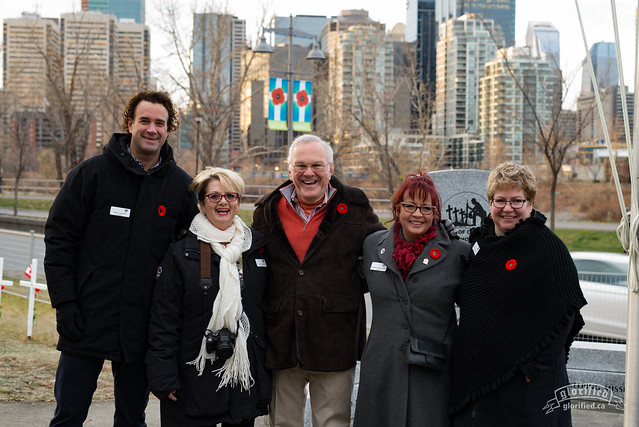 “The ‘Memorial Drive Crosses Project’ goes back ten years. My wife had passed away and I had been single for a while. Some time later I had met a lady from Georgia and was living in down there with her. One day, I was down there driving around and I saw these three crosses on a hill. I thought to myself that it might have been the site of an accident or something, but as I continued on I saw rows and rows of crosses. I had to pull over and walk among them. That’s when I saw they had names, ranks, date of death, and the age of the person on them. I was so overwhelmed that I began to cry. I suddenly had this intense feeling of the dead speaking to me from their graves saying, “We only wanted what you have. Remember us.” I came back to Calgary and started telling every one about this experience. I knew what I had to do.

We went to the City of Calgary and the Poppy Fund. We found this location and talked to the Parks organizations and they were all very supportive. This city has been fantastic with their support. The thing about working with veterans is that they don’t waste time. If you ask them for help for something, they get right to it. The support these guys have had for this memorial project is amazing. They pounded all the stakes and got the crosses up in no time. That’s the thing about military veterans. You never have to ask them twice.

A lot of the soldiers where buried were they fell, you know? This is the first time a lot of those soldiers have a marker for their graves. I had an uncle who served, but I was never in the service myself. I feel like it’s important to remember these guys and do something for them because they all gave so much.” J. Murray McCann (centre in photo) with some members the Field of Crosses Memorial Project.