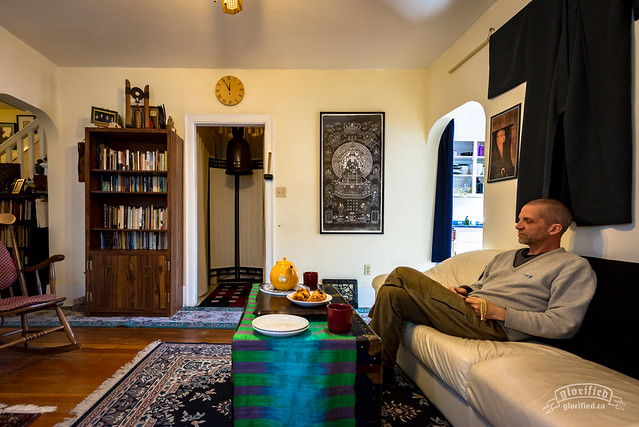 “‘Flowers to the void.’ You’re invited to offer, but who you’re offering to… who knows? What results of it is immaterial–just do it because.

It just worked out that I moved here seventeen years ago and I have a principle where, if you live in a city, live ‘in’ the city. So this place is central and it’s convenient. This weird little house that I live in had this weird little room in the front main level, so we turned it into a meditation room. My roommates moved out, so we decided to convert the space into a temple.

I’m what’s called a Soto Zen Buddhist Priest. For the last 22 years I’ve been practicing in this Zen tradition. It’s a school of Buddhism that has meditation as its central practice. I did a pilgrimage to Japan a few years ago and I was ordained as a priest. I came back and decided that I would get a few cushions and invited my friends to come and sit with me.

Most of my training is through the San Francisco Zen Centre where I was ordained again last Summer. I’m also the Buddhist Chaplain at the University of Calgary.

We’ve had a wonderful revolving door of people who have come through our space, some have had their fill and moved on, some have moved on to other places or Zen centres. Living in this neighbourhood and seeing all the changes, especially the new developments over the past few years really puts in things in perspective and I find myself truly coming to terms with the concept of Mortality.

We have a regular schedule of sits and events, it’s all at our website: CalgarySotoZen.Org.” Tim Sampson, Ordained Zen Priest, Little Tea Zen Temple.