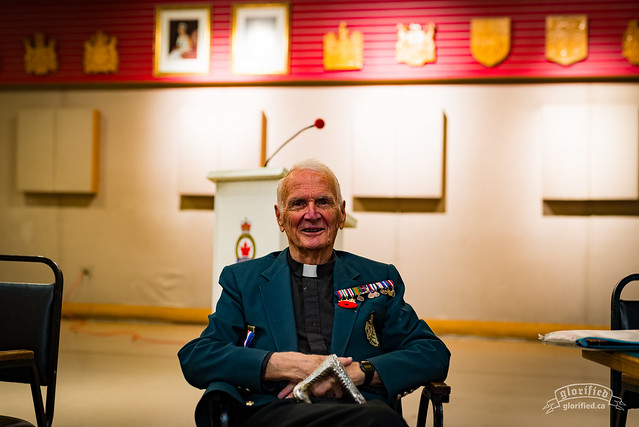 “I’m ninety-two years old. I like old people, that’s why I married my wife. She’s ninety-four years-old. We’ve been together for sixty-three years.

I joined up on August 6, 1942 and was discharged on October 8, 1945. I was a wireless operator with Lord Strathcona’s Horse, a Calgary tank regiment. I made 25 cents a day.

We trained in England for a year and on November 11, 1943 we went for service through Gibraltar. On the way there, part of our convoy was sunk. It was supposed to be a Military Hospital, but it ended up at the bottom of the sea. They put us up in Algiers for a while, and then sent us to Naples, Italy.
On my twenty-first birthday we took a train to Ancona and that’s where we met the war. After we liberated Italy, they sent us north to Holland.

Yes, this shrapnel is the nose of a 500 pound bomb that was dropped on us the day after probably the major battle of Italy in the Second World War for Canadians, which was the breakthrough of the Melfa River, when in one day we lost a third of our tanks and a third of our officers. A Victoria Cross, and a Distinguished Service Order and Distinguished Conduct Medal and several medals were given for that operation because we really broke through the German lines, which they didn’t expect to.

The Germans were such disarray that the next night they sent bombers over, and this is the nose of a bomb that dropped from probably 14,000 feet and landed 10 yards from our tank and the ground was hard that spring, very hard, like concrete and despite that, the bomb drop dug a crater six feet deep and probably 20 feet across, and missing our tank by probably 15, 20 yards, something like that.

As soon as the Rhine was crossed and the pontoon bridge built, we pushed our tanks across at Emmerich [am Rhein, Germany] and went back into Holland. Probably the most exciting battle, certainly in Holland, was Operation Dutch Cleanser [part of the Liberation of Arnhem, April 12-16, 1945], which was from Arnhem on the side of Nederrijn [river] to Zuiderzee [inlet of the North Sea], probably, oh, a 60, 70 kilometers maybe. And with the orders we were given, within 5th Division, was to get through at all possible costs. There was probably half a million German troops in western Holland, and also V-bomb [V-1 Rockets] bases which were bombing London. So as soon as we got across there, that would finish all that.

So we went so fast, we didn’t take any infantry and that’s very rare for tanks to go without infantry because you’re very vulnerable. A man could be sitting in a ditch with a bazooka and knock a tank out. We went so fast, we outran our food echelons. And the Dutch people, who were eating tulip bulbs that winter, fed us with putting eggs and milk into our tanks as we came down the road. And that really got to us. Dutch people were just fabulous. And when we got to Emmelo, which is a little town short of Harderwijk [Netherlands], and the heavy fighting before that, a lot of tanks knocked out, and all of a sudden, Jerry took off. And in the town square, we moved our tanks in and within minutes, there were probably a couple of thousand people.

I have pictures of girls climbing all over our tanks, you could hardly see the tank. And I got up in the turret and started the people singing, “Wilhelmus van Nassouwe ben ik, van Duitsen bloed,” which is the Dutch national anthem. And there wasn’t a dry eye to the place, 2,000 people. They hadn’t been able to sing for five years.

The education that many of us received that we never would have, had there not been a war, because we couldn’t afford it. Also, the tremendous bond of affection between Holland and Canada because of the liberation and the kindness of Dutch people who were eating tulip bulbs in the winter, and then feeding us with milk and eggs that spring when we came through. I am anti-gun. So we raised four children in our family, and I said to my wife, I said, “There will be no guns in this house.” And she said, “Well, you’re crazy, they’ll play with their guns with their friends at school.” I said, “That may be, but there will be no guns in this house.” So this is the line I have taken with going to different schools, that guns I don’t think accomplish anything. And so yeah, I was so highly trained, I could take a Bren gun apart with my blindfold, and we had to do that, and put it together again and all the other weapons too. But so I know where weapons are, I’ve been there, but I don’t think this is an answer, so I’m very anti-gun.

I suppose this probably had some influence on my later decision, somewhat later, to enter, to study for holy orders to be a priest. To see many men who were much better than I would be if I lived to be 100 killed, so it caused me to ask, you know, what is the purpose of my life. And not that you couldn’t have a purpose in life as a ditch digger or as an engineer or as a fireman or whatever, but I felt that my particular vocation here was to be a priest, m’hmm.” Father RHS Greene. A remarkable man, Father Greene, or ‘Padre’ as he likes to be called, still lives in his home in Sunnyside and visits the Kensington Legion to spend time with all the ‘young kids’–other seniors who are younger than him.