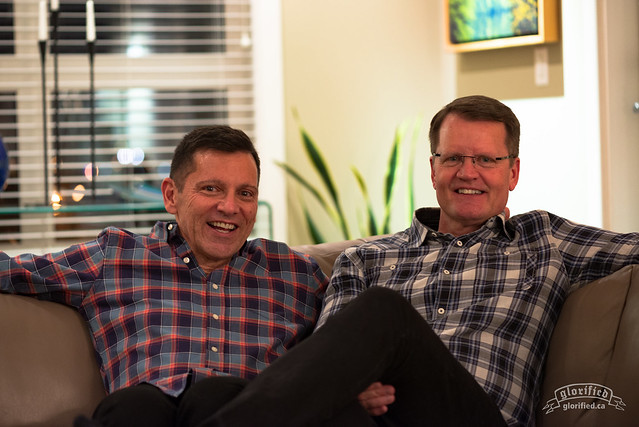 We met at a Christmas Eve party back in 1995. We were both working for DisneyWorld. I was general of Epcot until April of 1997. Now I work for West Jet. I’m Senior Vice President of Guest Experience.

I love the convenience of being around the little shops and restaurants. We love being in this neighbourhood. It feels like a small town but in an urban area. We were living in Marda Loop but we knew we wanted to be in Kensington.” Ed (left)

“My last role with Disney was in Community Relations. It was great! I got to liaise with important people. I got to meet JJ Abrams, Michael Jackson, Michael J. Fox… I gave them all tours of DisneyWorld. Before that I was in Human Resources. I got to recruit animators for Mulan. Now I guess you can call me a home maker. We lived in California for a while and sold our house to Jim Parsons–you know, Sheldon from Big Bang Theory? He’s a really wonderful guy, really funny.

This is a very friendly community. Extremely friendly, and welcoming. There’s a warm and inclusive feeling in this neighbourhood.” Geoff, (right)