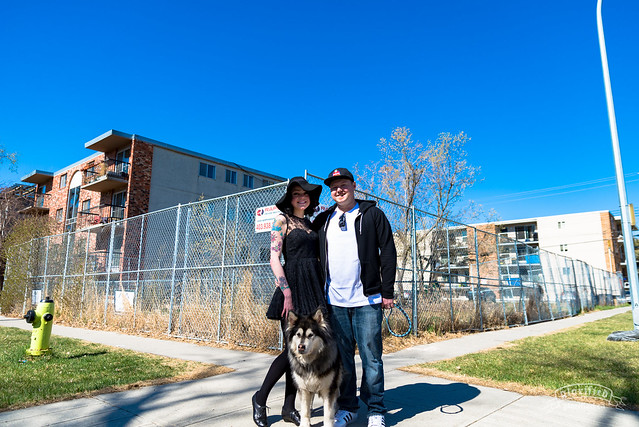 “We moved in here February 2010 and moved out December of 2011. A good friend of ours lived here for about a year before they demolished it. We moved a few blocks over to 4a Street.

They way we got our house we live in now is good story. We became good friends with an older couple just by way of walks through the dog park. We mentioned that we were interested in buying a house, but wanted to stay in the neighbourhood. The couple mentioned that they were considering selling theirs, so we made a deal. We didn’t need to involve any realtors or agents–they just wanted to sell their house to people who wanted to live in the neighbourhood. It’s actually kind of funny: they had bought the house back in the day for $80000.

Anyways, before they demolished the house we moved from, we went inside and took the original doors which were made of solid wood, the old claw foot tub, even one of the original heater grates. There were a lot of hidden treasures too. There was one door knob that was a real find. It had been painted so many times that when we stripped off all the paint, it had this beautiful filigree workmanship to it. It looked like it should have been the front door, and maybe it was at one point. There’s an old picture of Sunnyside from 1911, and the house that used to be here is in it. It just didn’t have any of the additions.

I think that if you go out for a five minute walk, you hear a story. There’s such a good community here. Whenever we take the dog for a walk, we always have something to talk about. You run into people you know, even people you used to live by–they’re still happy to see you.

Sarah works downtown and this neighbourhood is central for my work. We walk wherever we need to go. There’s so many friends here. You know, good people is everything you need.

The dog park is also amazing. It’s not a manicured park. It’s a nice woods where you meet so many people.

Sunnyside is a good safe neighbourhood. You see lots of kids out playing, even though you’re in the inner city. Everyone looks out for each other, it’s really good for that.” Sarah and Jack, with Kira–standing in front of the property they used to live in. The lot has been empty and abandoned for about three years.