First and foremost! Thanks so much to everyone who came out to the #Sunnyside365 Wrap-up Exhibition. I’m thankful for all the support from so many amazing people. I hope everyone had a good time! Also: a big thanks to the volunteers who helped out!

I have an announcement!

I’m pleased to announce that my next project (post #Sunnyside365) is out and available for purchase!

The new project is called “Facets” and it explores the severe depression that I’ve been suffering through over the past 9 months. I’ve got 8 prints, limited to 20 of each, printed on metallic paper.

Head over to the “Shop” section to see them all!

Well folks! That’s a wrap! It’s been a monumental year for me because of this project. I’ve learned so much about myself and this amazing neighbourhood.

I’ve decided that I’m going to keep updating this page with shots from Sunnyside and Hillhurst, but not with the daily determination that I had followed over the past 365 days. Expect regular updates, stories and more!

For now, I’m busy getting ready for the ‪#‎Sunnyside365‬ Wrap-up Exhibition on July 9th. Come on down! Bring a friend! 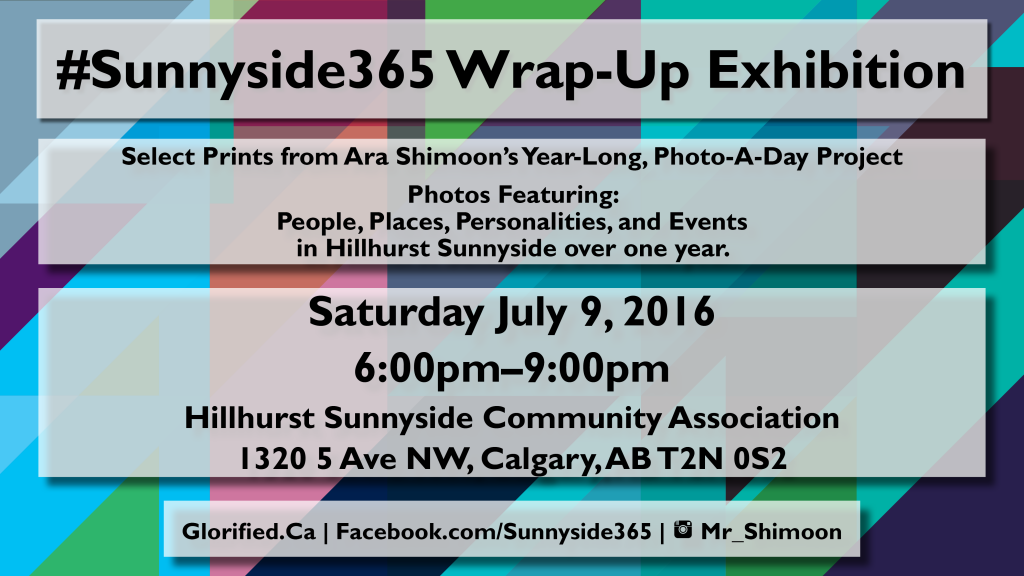 Exactly one year ago today…

It’s funny how time flies. Exactly a year ago today the hard drives in my beloved Mac Pro crashed, failed, and delivered their contents to the great beyond. In the coming weeks, I would decide to kick off a one year photo project to rebuild my portfolio and jump back into the game. I had no idea how this project would go, where it would lead me and what kind of experience it would turn out to be, but I’m thankful nevertheless.

I spent a total of $7000 on that machine. It was an 8 core Mac Pro tower, with two 500 gb hard drives and dual Apple Cinema displays. With that machine I:

I moved from house to apartment, from apartment to condo, and from condo to the home I would have with Debbie at St. John’s on 10th. Unbeknownst to us, the circuit that my computer was on was also what her blow dryer and straightening iron were connected to. One day while she was getting ready for work, the circuit tripped about 10 times in a row. My computer started and turned off as many times. Eventually the boot-up record was completely garbled, the ball-bearings in the drive blew and the disk itself was totally shot.

In the coming week I would take my drives to a data recovery company, only to discover that it would cost me $2300 for what would be a partial recovery at best. I threw in the towel, sulked, then tried to make sense of how to get over it. Losing the content wasn’t so bad – it was the loss of the curriculum that I was in the process of writing for new class that I would teach at SAIT, as well as the loss of some final papers that I was working on in the last few weeks of University that really stung.

It was later on in April of 2015 that I started the idea for #Sunnyside365. I did some reading on one-a-day, year-long projects and they had the same theme: persevere. The blogs I read and the project I saw all had a similar message; if you could just make it one more day, you’ll thank yourself. If you can keep at it, change your routines and take the ‘long game’ approach to a one-a-day, you’ll make it. It’s funny that the advice for completing this project is the same that I’ve told myself as I’ve fought with depression over past few years.

This project has been an incredible experience. As I go into what I’m calling the final stretch of #Sunnyside365, I’m both sad and optimistic. It’s been a remarkable journey so far, and I’m having to learn how to let it go when it’s over.  However, I am looking for some inspiration for what I should do after wrap up #Sunnyside365 – my instincts tell me to open up the project to the entire city of Calgary, but that’s a huge undertaking. Still, with just under 70 days to go on the project, I’ve got a few tricks up my sleeve, and a few announcements to make.

Thanks to everyone who has participated, supported, and talked with me through this journey. I hope that I can honour your kindness and compassion through my work on #Sunnyside365.

Thank you all for your inspiration.