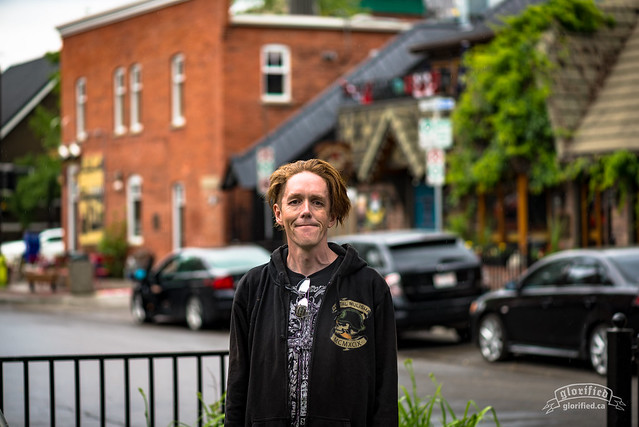 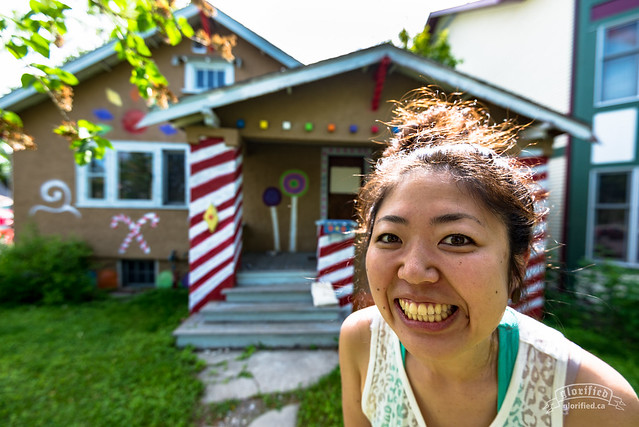 “I lived in this house right after I graduated from ACAD. I have no idea who painted the house… it was painted after left. I guess they kicked everyone out because the house was going to get knocked down, but that was years ago. I’m surprised that it’s still here and the art is still up.

I was in and out in less than a year. That was 2008. It feels so long ago, but also just like it was yesterday.

So much to say about the neighbourhood, where do I start….

I’m such an introvert but when I lived in this house I was such an extrovert. We were always in Riley Park, going to bars, seeing friends, getting together. I live in Sunalta now, but I love the art store here, the shops and going for tea.” 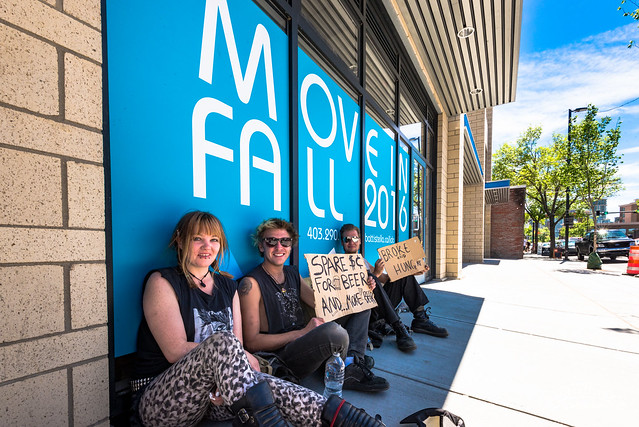 “We were up in Fort Mac for a while, just out there in the trees. It was great. We decided to head down to Calgary and just sort of stuck around. There’s something about this city that just draws you in and keeps you here. Maybe it’s the people, but we’re having a good time. Yeah.

We’re heading to B.C. and had a ride all lined up, but it sort of fell through. We got some work here and made a couple of bucks. Now we’re just enjoying some sun and making some change for the trip. We’re supposed to have a ride on Monday to hit B.C., but if it falls through, we’ll probably hitch.

Yeah, head to B.C. and be around some nature. That’s the idea.” 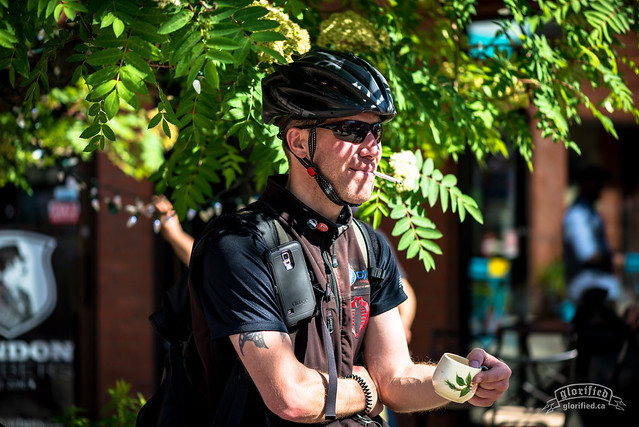 “I’m a bike courier. I’ve been doing it for fifteen years, but it feels like twenty, haha. I come to Kensington to fuel myself with Roasterie Coffee. I actually live on the other side of the river, but I spend most of my time here. Yeah, I guess I live in Eau Claire.

What do I like about the neighbourhood… hmmm. Well, I like the giving nature of people here. Kensington is totally community minded. Also, it’s nice that I don’t have to hang out with my cats when I’m over here. Ha ha!” Markus. 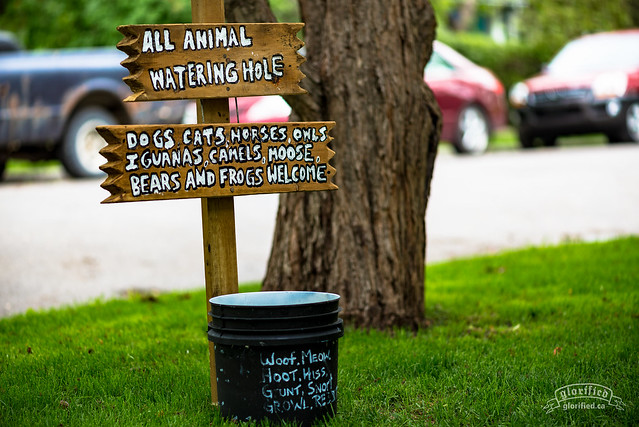 “This little neighbourhood… It gets this reputation for being so eclectic and weird and neighbourly. Honestly though, it’s not some strange coincidence that the people here are so in-tune with the idea of community. Don’t forget that we’re practically downtown, sandwiched by a couple of really busy thoroughfares, and the property is really, really expensive. I think that in spite of that, the residents here all sort of give each other permission to be a bit of a weirdo. It’s what makes Sunnyside and Hillhurst so special.”

It’s hard not to fall in love with this city, even with it’s flaws.

As I turn the final corner into the closing month of #Sunnyside365 I’d like to thank everyone who has supported and participated in this project. You’ve all helped me to elevate my work. I’m not sure what else to say, I’m truly grateful.

A huge thanks to Devin Pickering for helping coordinate this incredible shot. For the full scale image, click the photo and it’ll take you to flickr. 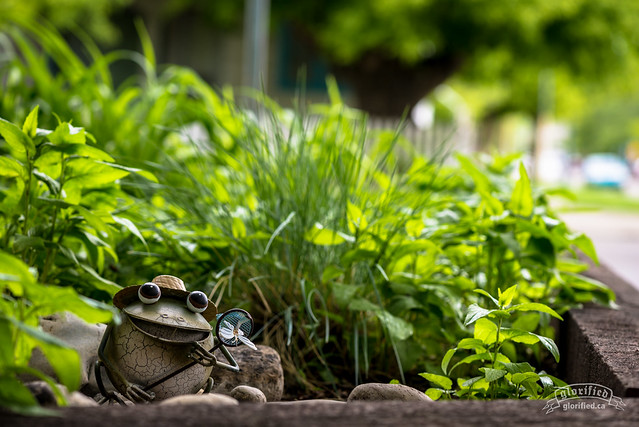 “We want to grow old in this neighbourhood. We want to have our kids grow up and play street hockey, or trick-or-treat with other kids. We want them to walk to school, have birthday parties, and ride bikes. There’s nothing like the sound of kids playing–it gives such an energy. It’s the sound of life.” 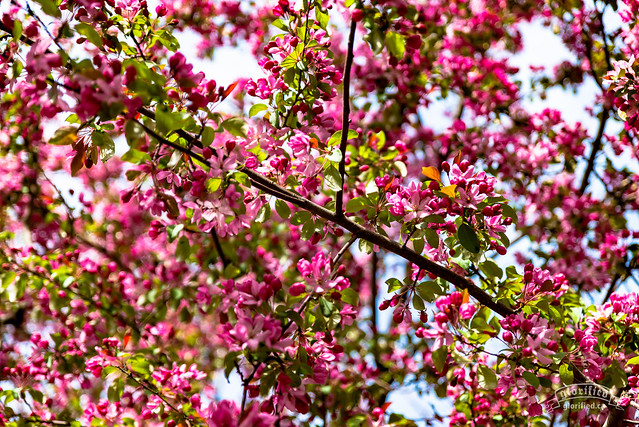 It’s official! Spring is in full springiness, and I’ve got fifty days left to go on #Sunnyside365 (+1 if you count the leap year). I can’t say how wonderful of an experience it’s been, because words can’t describe the overwhelming feelings I have. Thanks to all the support from everyone who has been involved, liked, shared, commented. I’m truly, truly overwhelmed. Calgary really is the greatest city in the world. 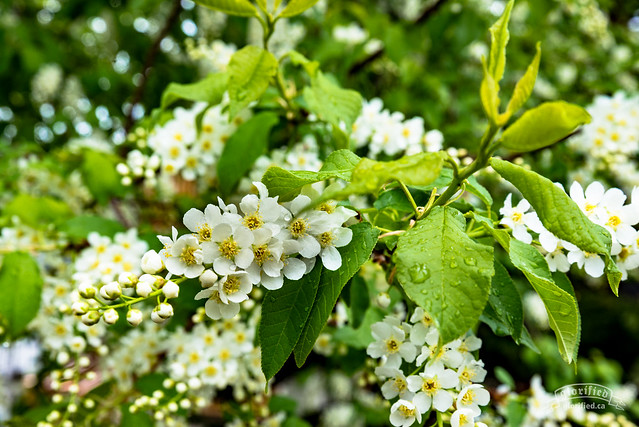 “Finally! We get something that feels a bit more like the time of year. Look! Just a bit of rain and everything explodes with life.” 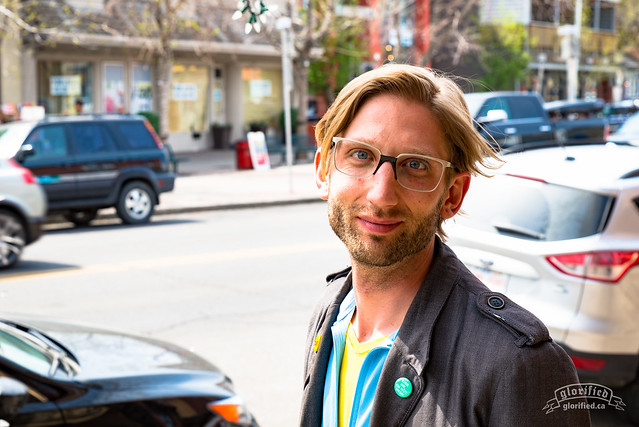 “I’m a lighting designer at SMP Engineering. I’m working on the West Eau Claire Pathway, amongst other things. Our office is just above Peppino on Kensington Road.

I can’t believe how many corporate offices are in Kensington. It’s great working down here, knowing you’re not just a corporate drone walking in and amongst the office towers downtown. You can actually get to know your maintenance person in your building.

I like that Kensington is a community. Just this morning on the way to work I had a wonderful conversation with a lady walking her dog. I don’t know her name, but was a nice chat. You feel like you have a place in this community, no matter who you are–you’re not just here to do your job.” Ian, Lighting Designer, SMP Engineering.