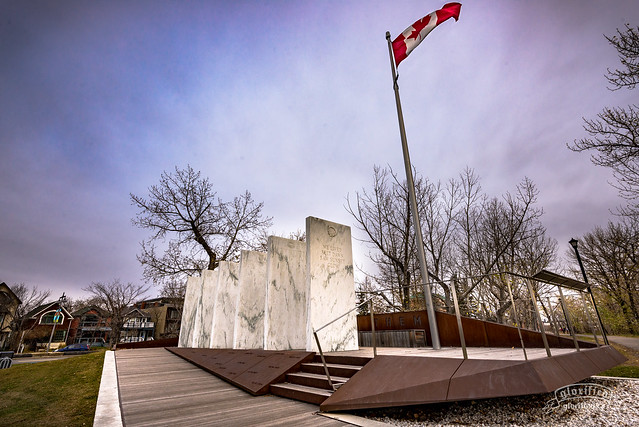 “The Calgary Soldier’s Memorial is part of a larger parks project along Memorial Drive called the ‘Landscape of Memory.’

The sculpture stands as a tribute to the sacrifice and service of soldiers serving with Calgary’s Army Reserve Regiments in the First and Second World Wars, as well as in the recent conflict in Afghanistan.

Six large upright marble slabs carry the names of over 3,000 soldiers who died while in service. They face the direction of Mewata Armoury a mustering point from which many Canadian soldiers departed to serve their country.

The Calgary Soldiers’ Memorial consists of several stone tablets bearing the names of soldiers from Calgary area regiments killed during times of war. These regiments include, in order of precedence, The King’s Own Calgary Regiment, 41 Combat Engineer Regiment, 746 (Calgary) Communications Squadron, The Calgary Highlanders, 14 (Calgary) Service Battalion and 15 Field Ambulance. Also represented on the tablets are those units of the Canadian Expeditionary Force perpetuated by the current Calgary units of the Canadian Forces, including the 10th Battalion, CEF and 50th Battalion, CEF.”