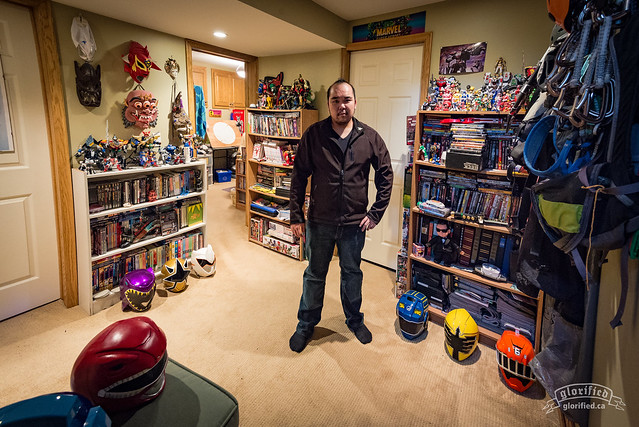 “I want to say that the type of things I collect is what raised me. I can’t explain the fixation with it–it’s something that’s always been there. I guess it’s what led me to complete my education at the Alberta College of Art and Design. I’ve always been into it, which is why it’s all around my home.

I’ve watched Power Rangers since it aired in 1993. It was one of those things that I feel I’ve lapsed back into. A lot of kids want to things when they grow up, but for me, it’s something that I came back to as a grown up. It’s odd how many like-minded people there are in this particular fanbase. There’s a lot of people who live the messages that the show was trying to convey: teamwork, honesty, courage.Other fans take to the style of the show: the monsters, the costumes, the suits. It’s a wide variety of fans. I’d like to say that the show has a lot of good morals. Along with The Power Rangers, I grew up with Superman and it’s really the moral code that’s resonated with me.

The collection, ha, ha! My parents were really frugal in their spending on stuff like this for me and my brothers when we were children. Now as an adult, I can fulfill those childhood dreams. I probably have about seventeen different and complete Power Ranger suits of different styles all over this house (boots, gloves, helmets, accessories). In addition I have over fifty helmets. What you see here is just a small part of it.

Our Ranger group goes to conventions regularly. I’m lucky to have found enough people interested in Power Rangers to make a community out of. People from Edmonton, Calgary, the surrounding area.

Sunnyside has always been a happening area. It seems like you’re close to everything. I’ve lived here for…well, going on six years. Yeah, it feels like there’s always something good happening. It’s close to the art school, it’s central. It also helps that I work in the neighbourhood. I’m technically the sous-chef/assistant-manager at Julio’s Barrio on Memorial Drive and 10th Street.