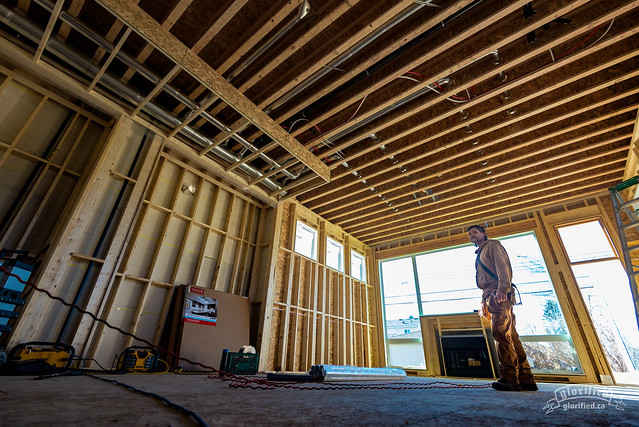 Otherwise I do a lot of custom cedar gazebos and decks–more of like timber framing.

It’s got thirteen foot ceilings here on the main level, ten foot on the upper level. The biggest window is a fifteen by eleven foot window over the rear fireplace. I’m a few days away from completion and this project is a couple months from closing.

I love this neighbourhood. The people I meet when I’m doing a project are really friendly. They’re content with their little houses while they see these multi-million dollar projects going up. You know, even just the interest that permanent residents take in their neighbourhood when I’m coming to work. People take the time to get to know your name. It’s a level of friendliness that you don’t get in the big volume jobs in the suburbs.

You know, the last place I framed in Hillhurst–the guy across the street was born into and grew up in his house. He took it over from his parents. That’s what you call an old neighbour!” Steve Klassen, Framer, on his job site at 505 18a Street NW.