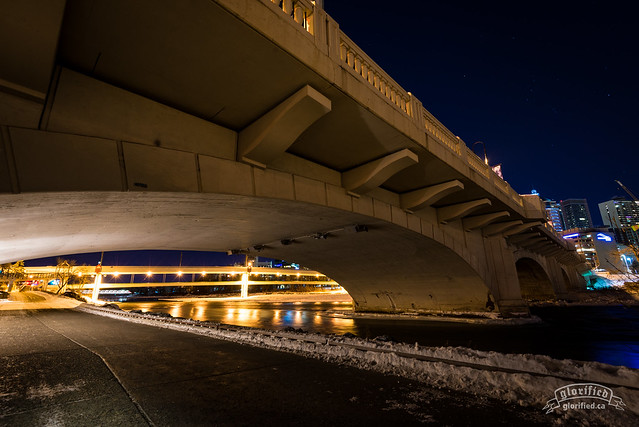 The City of Calgary moves. On foot, on bike, public transit, car; and all the while, the Bow river keeps flowing through it all.

I think there’s a metaphor in there, but I’ll wade into it another time.

At the end of 2015, I’d like to thank all my followers. Since June 21, they’ve pushed me to seek out 194 photo subjects. I’d also like to thank all the people who have participated: the folks I’ve chatted with in coffee shops, the local business owners, the members of the community, Druh Farrell (Ward 7 City Council), the HSCA, and all the people who have inspired me to shoot better photos, seek out new places, as well as all the little nooks and crannies that Sunnyside and Hillhurst have to offer.

Most of all, I’d like to thank all the people who have lived in this neighbourhood, served as business owners, residents and community builders. This city owes it to you.

Built in 1921, the Louise Bridge was constructed to move street cars and pedestrian traffic over the Bow River between downtown Calgary and the Kensington Area. The bridge was named after William Henry Cushing’s daughter, Louise.

William Henry Cushing served Calgary for six terms as a City Councillor, and a short term as Mayor in 1900-1901. He also served as an Albertan MLA.

The Louise Bridge is a beloved feature of Calgary’s riverscape and sees over 30’000 cars travelling on it per day, as well as countless pedestrians and cyclists.